The goal of this ongoing project is to teach students about Les Paul’s life of innovation and musicianship through hands-on project-based learning activities in which students analyze, recreate, adapt, and, ultimately, use musical inventions originally created by Les Paul. In early 2020, the PI and music faculty affiliated with the Electric Guitar Innovation Lab (EGIL) at WPI began developing hands-on instructional activities centered around Les Paul's innovative spirit and implemented activities into several existing WPI music technology courses. Undergraduate students from various majors enrolled in these courses worked in small groups and self-selected one of Les Paul's innovations to study including the Rail, the Log, and the Les Paulverizer. This research is supported through a generous grant from the Les Paul Foundation .

Les Paul lived a life of innovation fueled by his curiosity, his interests in experimentation, and his willingness to encounter setbacks, and this project seeks to encourage students toward the pursuit of innovation germane to their own interests. As described herein, some of these projects were literal recreations of Les' inventions using comparable materials while others are new adaptations of these inventions inspired by the analysis of Les' work.

With consideration of Les Paul's many inventions, the PI's developed several open-ended projects related to electronics, engineering, musicianship, composition, and performance in order for students to embrace innovation in these respective areas through the recreation and adaptation of experiments and innovations explored by Les Paul. Through these hands-on projects, students learned about the very unique and innovative musician Les Paul, his history, his work, and his legacy. Each student team worked during 7-week terms toward preparing deliverables unique to their respective projects including resources that future teams could leverage for future work.

The primary goal of the Rail project is for students to learn about the history and significant of Les Paul's "rail" experiment and the influence it had on later work by Les and others. Students worked with faculty to recreate and adapt this technology toward gaining an understanding of the roles of various materials in defining an instrument's timbre through experimention. The directive given to students in the first iteration of this project (2020) was as follows:

Goal:
Make a literal recreation of the original Rail that Les Paul designed.

Objectives:
-Explore the original Rail; from what material was the original rail made? How did it work? How did the electronics work? There are many books in the WPI campus library on this topic.
-Devise a plan and a timeline for the creation of specific aspects of the project; this project may seem easy, but it really isn't! Regardless, set stretch goals for yourselves: if you think you can get the rail in good shape by the end of the term, consider some features that did it exist in the original or a comparative study of multiple rails made from different materials of the same mass!
-Discuss materials with your Professor; you should absolutely try to find a piece of rail from a junkyard someplace (or at least the same material), and there are also some ready-made transducers available in our lab that can streamline your development process.

Deliverable:
By the end of this term, you should have a fully-playable, self-contained, ready-to-go rail instrument that can be performed by others through an amplifier. 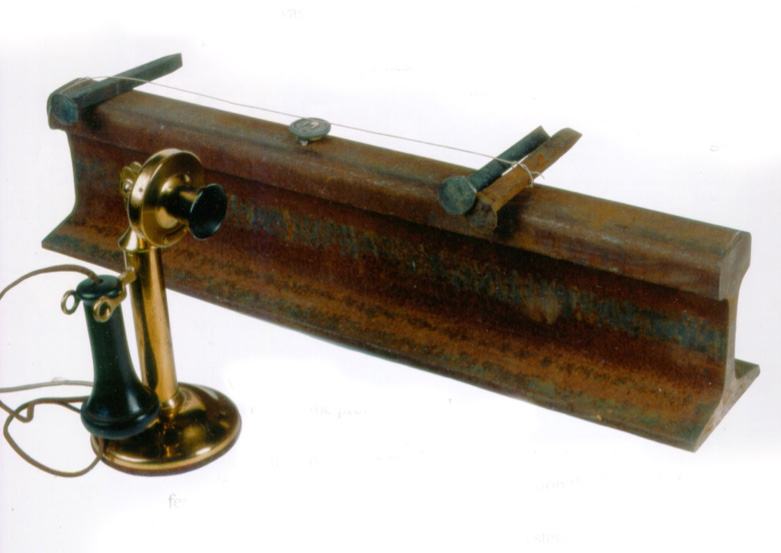 This team sought to recreate Les Paul's rail using materials comparable to what Les originally used as well as some alternate materials. The team fabricated rails of two different metals and used spectral analysis tests to compare the frequency content of each instrument. 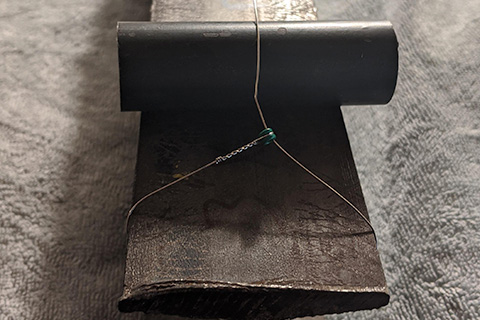 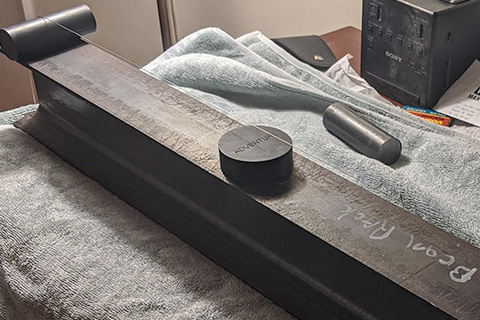 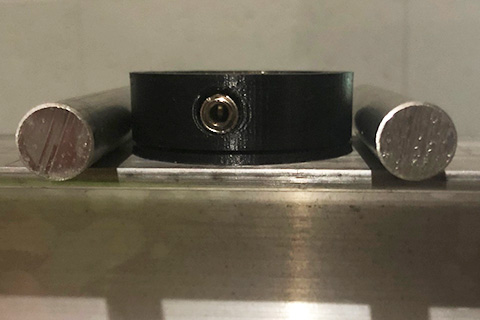 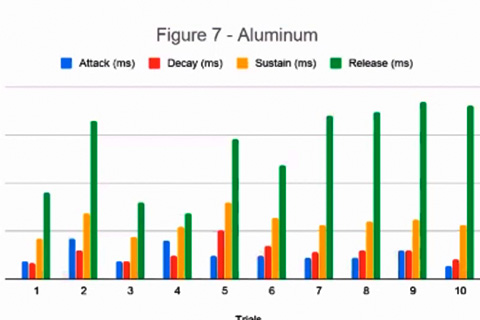 Using the resources at hand

Of note: the COVID-19 pandemic occurred during academic year 2020 when we first began these projects. The ensuing self-quarantine forced all project work to be carried by students in their respective homes and without access to many campus resources, workshops, and tools. These constraints, however, forced the students to conduct these experiment with limited tools and resources in the same way that Les's original experiments like, for example, the rail experiments in which he used a 2-foot piece of discarded rail he found across the street from his home and the microphone from his mother’s telephone. Read more about the students' work in this report .

The anticipated result of exploration of the Rail was the creation of several new new instruments made from found materials. Students were encouraged to explore unconventional materials that are not traditionally used in instrument-making. By virtue of this study, students learned concepts from material science as they relate to instrument timbre as well as the potential for the use of sustainable and recycled materials in instrument making. The broad significant findings were related to the understanding of how specific materials can be used in conjunction with magnetic pickups, piezo-electric elements, and other transducers to produce new timbres; this notion was central to Les' Rail experiments.

Using Les Paul's work with the Rail and the notion of "found materials" as inspiration, students then pursued developing following adapted instrument projects: 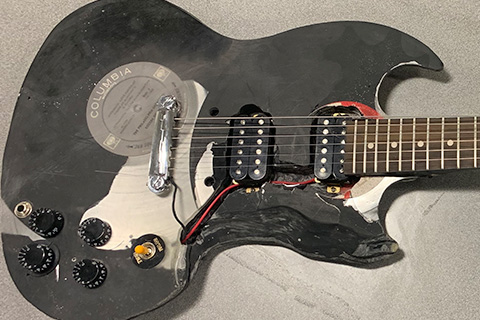 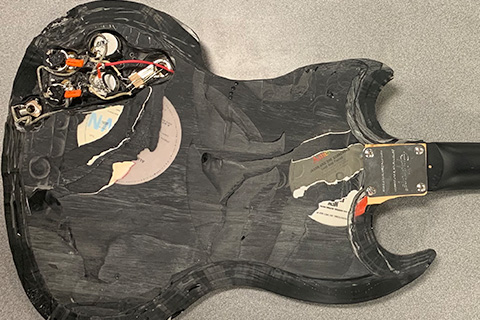 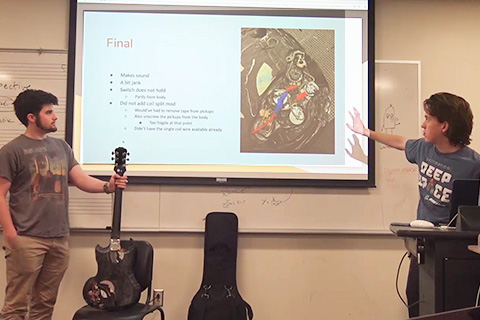 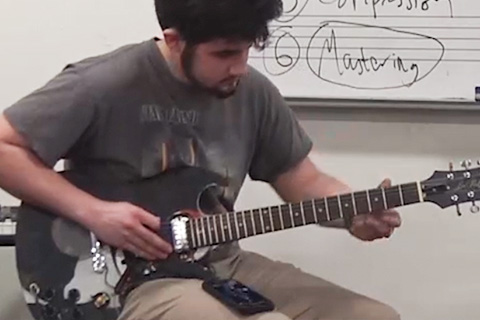 One of the learning outcomes that can result from these types of experimental explorations is a set of reflective statements about "what worked", "what didn't work", as well as an understanding of "what could be done differently" in the future. In this video , these students discuss these very things, which will allow future student groups to build upon their efforts; "...by doing this, we found the main problems that can easily be avoided [for] next time". As the students learned, part of what made Les Paul a successful innovator was his resilience and continued experimentation; the rail, just like this vinyl-body guitar, isn't, in itself, a very sophisticated musical instrument achievement, but it is and was a stepping stone toward great ideas that followed.

The primary goal of the Log project is for students to learn about the history and significant of "the Log" and learn about the ways Les Paul leveraged his findings from the Rail and other experiments into what became known as "the Log". Students explored a literal recreation of the Log with special attention drawn to the novelty of the faux "wing" sides and the perceptions and expectations of "conventional" guitarist at the time. Students leveraged their findings from the Rail experiments and integrated the best aspects of those findings into newly created instruments. Students worked with faculty to explore various aspects of using magnetic pickups, piezoelectric transducers, and microphones in instruments made from a variety of materials including wood, composite and 3D-printed materials, and sustainable and recycled materials. The directive given to students in the first iteration of this project (2020) was as follows:

Objectives:
-Explore the original Log; from what materials was the original Log made? What about the "wings"? How did it all come together? There are many books in the WPI campus library on this topic.
-Devise a plan and a timeline for the creation of specific aspects of the project; the “wings” portion of this project alone will require some real effort to nail, so outline your scope for this term accordingly!
-Discuss materials with your Professor; there are many ready-made components available in our lab that can streamline your development process (necks, tuning pegs, pickups, etc.)

Deliverable:
By the end of this term, you should have have a fully-playable, self-contained, ready-to-go Log instrument that can be performed by others through an amplifier. 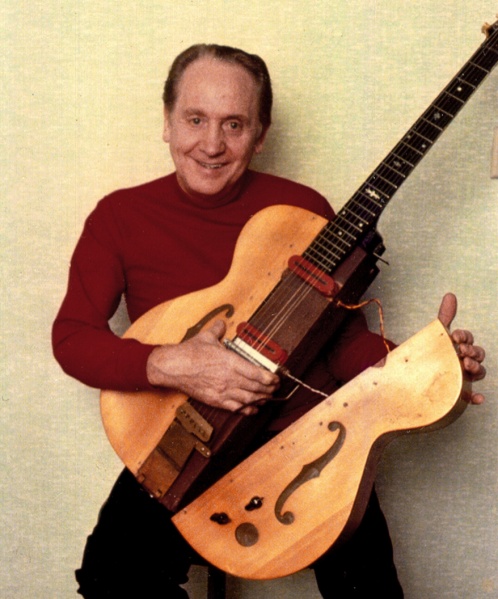 This team sought to recreate the Log using comparable materials. The images and video below describe the processes completed by these students. 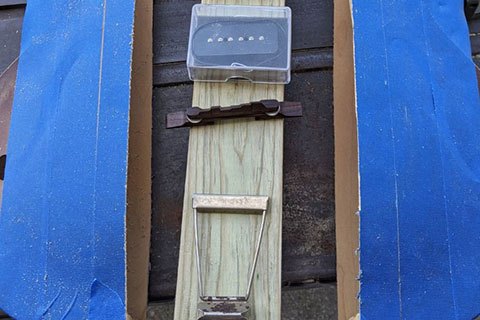 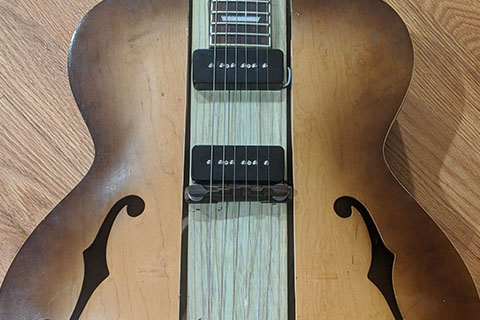 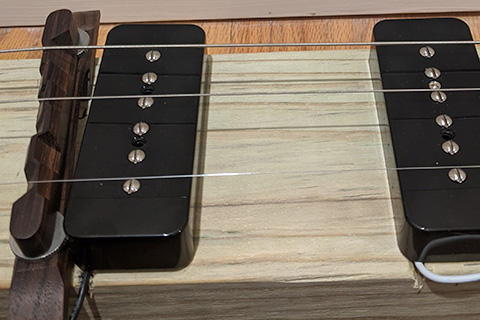 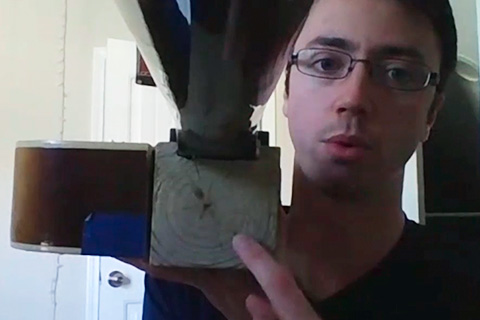 Les Paul regularly demonstrated a sense of fearlessness with regard to his innovative efforts; of similar mindset, the two students who asked to work on this project were not guitarists, and, yet, responding to the same type of inquisitive fearlessness that Les demonstrated, these students learned what they needed to, as they needed to through this hands-on project. Read more about the students' work in this report .

The anticipated result of the exploration of the Log was the creation of several new musical instruments. Just as with the rail, students were encouraged to explore other materials that are not traditionally used in instrument-making as well as instrument size, ergonomics, and general refinements to all aspects of instrument-making. Les addressed these areas in a variety of his projects including his aluminum guitar and his mini guitars .

Inspired by the removable sides attached to the Log (on hinges) and the "repurposed" materials aspects of the Rail, this student team created a guitar from pieces of an old door and, toward making an ergonomic arm-rest, attached a hinged arm to one of the sides. 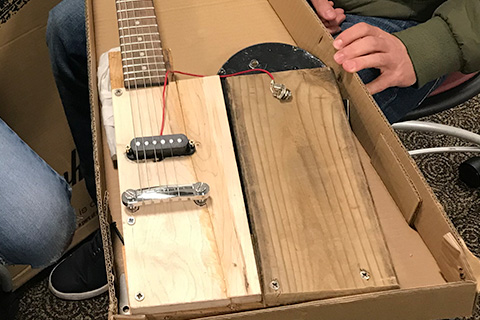 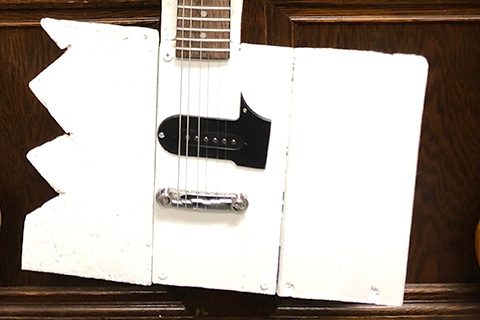 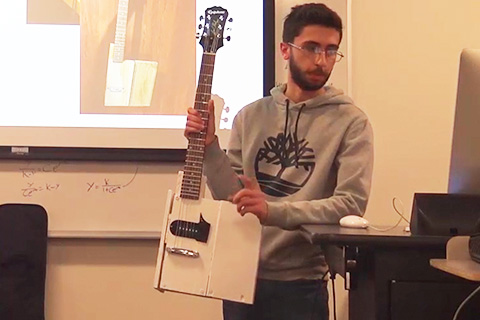 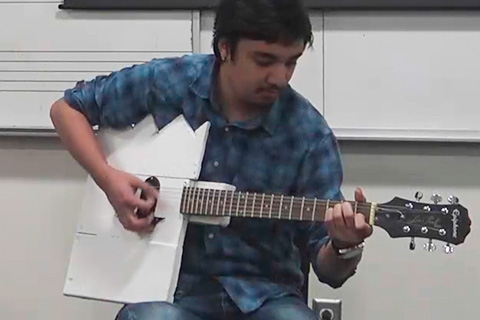 The primary goal of the Les Paulverizer project is for students to learn about the history and stage implementation of the "Les Paulverizer" . Students then worked to recreate and adapt this technology toward new music performance experiences. The anticipated result of this exploration was the adaptation of guitars and other musical instruments so that they would be capable of playing back pre-recorded audio files by using accessible controls affixed to or embedded within the instruments themselves. Students then compose and perform new pieces using this technology. The directive given to students in the first iteration of this project (2020) was as follows:

Goal:
Make an adaptation of the Les Paulverizer using modern technology that 1) can be affixed to or embedded within a guitar and 2) sends MIDI information to a computer (via wired or wireless technology) in order to 3) play audio clips and 4) adjust levels and other parameters inside of a Digital Audio Workstation (DAW) 5) on Mac Windows computers 6) with an easy and hassle-free setup process.

Objectives:
-Explore the original Les Paulverizer; how did Les Paul use this device live? How did it really work originally?
-Devise a plan and a timeline for the creation of specific aspects of the project; you’ve got a lot going on in this project (computer connectivity, circuit boards, potentiometers, etc.), so plan your time wisely!
-Discuss materials with your Professor; consider both wired and wireless implementations as you explore microprocessors.

Deliverable:
By the end of this term, you should have have a fully-playable, self-contained, ready-to-go Les Paulverizer that can be attached to an instrument and used to playback audio from a computer. 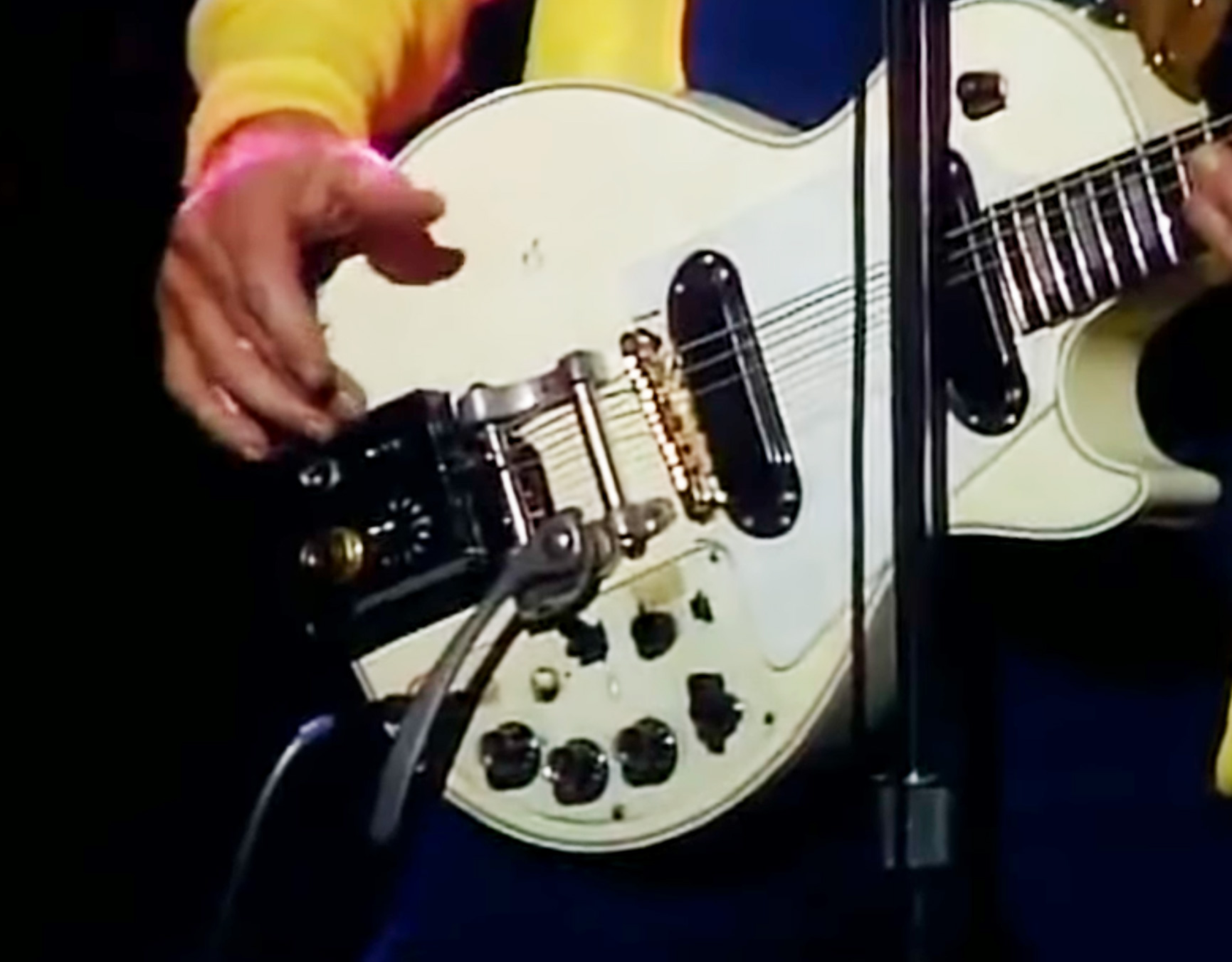 Unlike the literal recreations of Les' Rail and Log projects, students analyzing the Les Paulverizer initially explored modern-day adaptations. The purpose of this approach was to allow students to focus on developing a system that could 1) be easily adapted to other operating systems and expanded to include additional features (accessibility accommodations, novel operations, etc.) and 2) allow users to readily integrate the technology into their own music performance and composition ideas as Les ultimately did on stage with the Les Paulverizer.

Inspired by the original Les Paulverizer, this team developed a Bluetooth device that transmits MIDI messages to control audio file playback in any DAW. Read more about the students' work in this report and in the videos below. 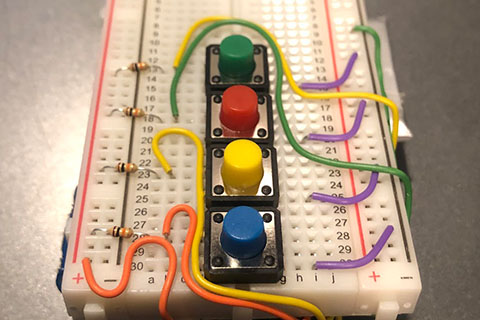 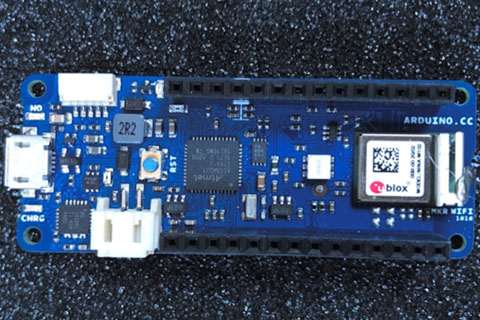 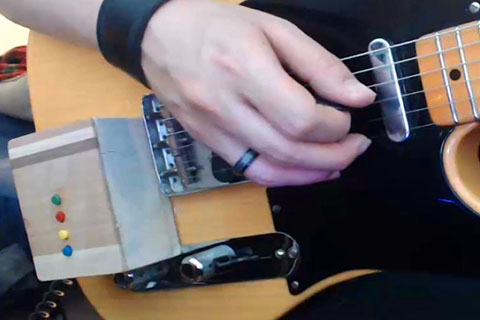 An overarching goal of studying Les Paul's innovative mindset through these courses is, naturally, to inspire students toward developing their own innovative ideas. Below are examples of other new music technology projects created by students that were inspired by this course of study about Les Paul:

Les Paul was a pioneer in the development of many different effect devices including reverbs, phasers, and delays. This team sought to innovate on the classic fuzz effect sounds of vintage electric guitar stompboxes by adapting classic circuits with modern twists. 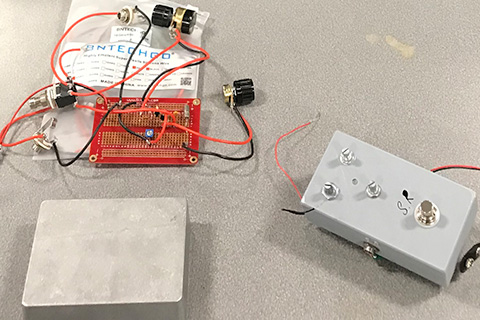 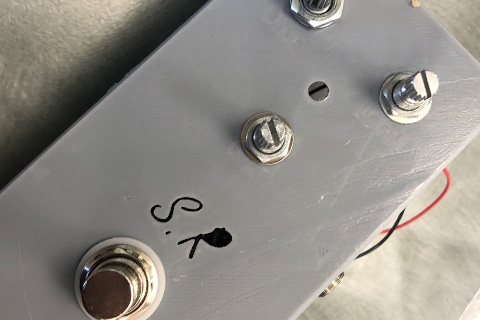 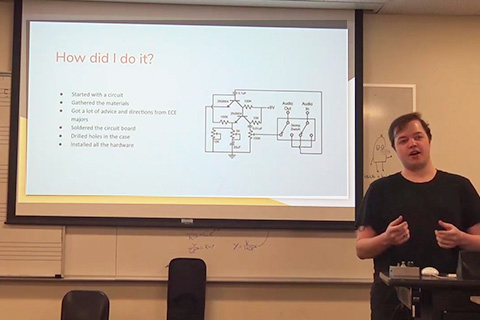 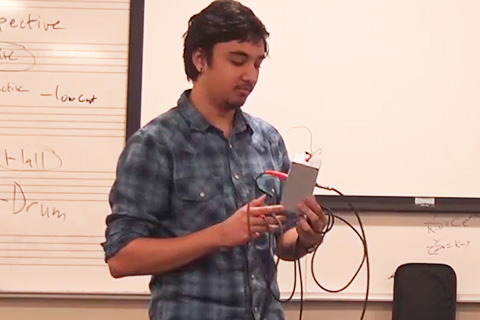 Special thanks to:
The Les Paul Foundation for the resources on Les' life that you make available through your website and for the generous grant support.
All of the many WPI students who participated in this research and music-making!

Sponsor Your Own Project